admin
Tickets for 2016 shows:
Download song:
Become a TPG Insider!
Subscribe to our main channel:
Subscribe to our BTS channel:
Follow us on Facebook:
Story behind the song
Hello/Lacrimosa (or “Chello,” as it has affectionately been called in the studio) is a musical experiment bridging 18th century spiritualism and 21st century secularism. Imagine Mozart and Adele in the same room in an intense co-write session, quill and pen in hand, respectively. Picturing this hypothetical hangout helped to spark the creative combination of the two.
Haven’t heard “Lacrimosa” from Mozart’s Requiem? It is a powerful piece of music. Listen here:
As you can hear, both tunes’ divergent traits presented challenges. One wallows in a wide, painstakingly minor 12/8 time and the other drives a poignant bi-polar major/minor common time. One draws its power from the fullness of a grand chorus and orchestra, the other from the isolation of a lone voice and piano. One conforms to age-old counterpart canon and musical theory, while the other is conveyed via verse/chorus pop song parlance. However, they share the same fundamental feeling -- “Lacrimosa" (meaning “weeping” or “tearful”) mournfully bemoans spiritual death, while “Hello” gripes about relationship regrets. Different centuries. Different realms. Same emotion. Perhaps we aren’t as far from our predecessors as we think we are.
You’ll hear towards the end of the tune an attempt by both motifs to meet in the middle as the two textured melodies intertwine. In their respective stories both plead for reconciliation. Neither seemed to find it apart, but together they sing of a second chance.
The sounds you hear were created by 100 tracks of acoustic and electric cello, an instrument that has been emoting for centuries – an apt candidate for the task of tying together “Hellocrimosa” (our alternate affectionate title).
This video was filmed at one of our favorite locations: Tuacahn Amphitheatre, utilizing different patterns and settings of giant mirrors, diffused light, and some very cold fog. How is the camera not reflected in the mirrors? Simple. Magic!
Credits
“Hello” as performed by Adele (written by Adele and Greg Kurstin)
“Lacrimosa” from Wolfgang Amadeus Mozart’s Requiem
The Piano Guys arrangement produced and written by Al van der Beek & Steven Sharp Nelson
Performed by
Steven Sharp Nelson: electric & acoustic cellos, cello percussion
Al van der Beek: percussion, vocal textures
Recorded, mixed and mastered by Al van der Beek at TPG Studios in Utah
Video produced and filmed by Paul Anderson & Shaye Scott
Edited by Shaye Scott
Project Manager & Behind the Scenes: Kyle Fisher
Photographer: Addison Foote
Location coordinators: Jeremy Crawford & Frank Nelson
Techical Director: Wes Hamblin
Special thanks:
Tuacahn Amphitheatre (...)
Jones Paint & Glass. () 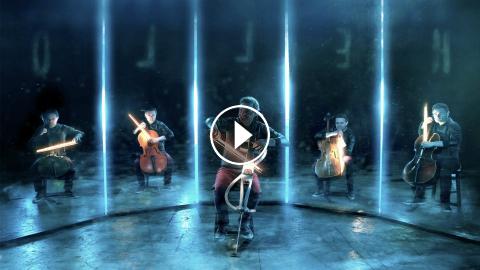