AVA
L’Empio Punito is the first opera where the character of Don Giovanni (Acrimante) makes his appearance. It was first premiered in Rome on February 17th, 1669 and this release is the recording of the fist modern times performance that took place at the historical Teatro di Villa Torlonia in Rome in October 2019, 350 years after its debut.
???? ???????????????????? ???????????? / ????????????-????????????: https://naxos.lnk.to/DYN37871ID!Dynamic
???? ???????????????????????? ???????? ???????????? ????????????????????: https://naxos.lnk.to/CDS7871ID!Dynamic
The fundamental dramaturgical lines that characterize the following versions, in particular Mozart’s, are already here: the complicity between Acrimante (Don Giovanni) and Bibi (Leporello); the despair of Atamira (Donna Elvira), abandoned by Acrimante; Acrimante’s attempt to seduce Ipomene (Donna Anna), betrothed to Cloridoro (Don Ottavio); the duel between Acrimante and Tidemo (Commendatore) and the latter’s death at Acrimante’s hand; the graveyard scene, where Acrimante invites Tidemo’s statue to dinner; the eternal damnation of Acrimante and the finale, in which all the main characters appear.
As Conductor Alessandro Quarta points out, Acrimante’s seductive power brings chaos and pain in the lives of the other characters but a lot of energy as well.
“[Acrimante’s] sentimental and emotional disorder disrupts the personality of the other characters who revolve around him He messes them up, makes them suffer and makes them behave in relation to the turmoil he creates”.
As far as the direction and the setting here are Cesare Scarton’s words: “the idea behind the sets of L’Empio Punito…is a world gone to pieces. In real life one sometimes meets a Don Giovanni and the meeting is a harbinger of great fascination and great adventure,but also damage. Imagine a mirror against which a stone has been thrown and has shattered to a thousand pieces…”
As far as the musical approach of the conduction, Alessandro Quarta underlines that “What today we are accustomed to thinking as being part of the score in the 1600s is not there, neither in the manuscript nor in the printed editions. Aside from very few indications, the composers of the day delegated decisions to the instrumentalists or to the harpsichordist of each specific performance. That’s what we must do, then; it’s like putting together a jazz group, we must make, on the spot, during rehearsals…artistic and performance choices that may be crucial. In this respect, we acted within what we can call knowledge of historical practice, but at the same time some artistic and interpretative choices require courage.”
Although Melani was at the beginning of his career as an operatic composer – as he was mostly dedicated to sacred music - in L’empio punito he proves to be very skilful in alternating lyrical moments and pure recitative. An all-italian young cast for a 4 K, world première recording. 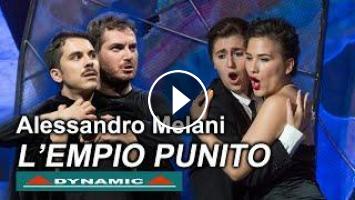 L’Empio Punito is the first opera where the character of Don Giovanni (Acrimante) makes his appearance. It was first premiered in Rome on February 17t...