Colin Marshall | September 2, 2020
Anat Cohen and Marcello Gonçalves's music comes from the heart of Brazil. The first two songs are choros, from the choro genre of music that originated in 19th century Rio de Janeiro. Think of choro music like New Orleans jazz, but in South America, both born of European and African influences. Cohen, on the other hand, is a clarinetist from Israel and the composer of these tunes. She developed a passion for Brazilian music while studying at Berklee College of Music and not long afterward found herself in a "roda" (choro jam session) in Rio de Janeiro with some of the most virtuosic players in Brazil's choro scene. It was on that trip 20 years ago when Cohen met Gonçalves for the first time. All these years later, choro music has woven many of the threads in Cohen's musical fabric.

This duo was recently revered for their 2018 Grammy-nominated record, Outra Coisa, which celebrates the music of the iconic Brazilian woodwind player and composer Moacir Santos. Gonçalves is acclaimed for refining Santos's orchestral arrangements down to just two musicians. Notice Gonçalves's seven-string guitar, a common instrument in choro music; the additional string extends the lower register as if to combine an acoustic and bass guitar. Cohen explained in an email that playing with Gonçalves "makes me feel like I am playing with a full band."

If not for the pandemic, Cohen would be on tour right now with two projects: the supergroup Artemis (which will release its self-titled debut album on Sept. 11 on Blue Note Records) and the Anat Cohen Tentet, which received a Grammy nomination of its own for the 2019 release Triple Helix. But this duo has managed to stay productive in Rio, with a new album in the works. Gonçalves is thankful for his time with Cohen this year to "practice our instruments, play in duo, compose, record or simply have silence, peace and stay safe." 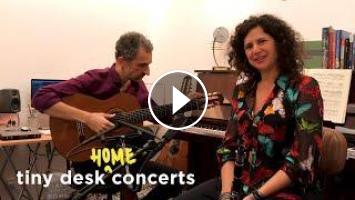