AVA
We are delighted to celebrate the 10th Anniversary Edition of Concerto: One Night in Central Park with this exclusive YouTube screening of the full concert.

“That was a memorable milestone in my career. One of its highest and most emotionally overwhelming moments. A mega-show that took 16 months of work, as well as a brave and ambitious artistic undertaking. A concert that went on to become my first fully live album, for which every note was recorded live, without a safety net.
I remember how anxious I was about those lead gray clouds that threatened the cancellation of the performance, with 70,000 people converging on Central Park. Shortly before going on stage, I wanted to go to my dressing room to say a few prayers, together with Filippo Sugar and the rest of those present. I also mulled over the great honor I had, to be singing together with many of my wonderful peers, right where my great friend and Maestro, Luciano Pavarotti, had performed 18 years earlier.
I also remember lovingly dedicating that extraordinary evening to the memory of my father, who – although he had never crossed the ocean – would continually encourage me when I was still a young artist unknown to most people, saying with prophetic lucidity: “You must go and sing in the United States, you must go to New York. They will appreciate you there, they will perceive the quality of your voice!”.
It was his dream, dictated by his fatherly love for me. With the "One Night in Central Park" project, that dream has come true.

I dedicate that extraordinary evening to the memory of my father, it was his dream". 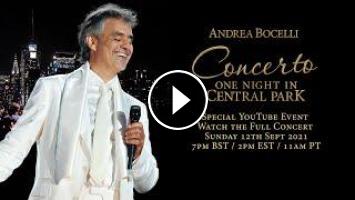 We are delighted to celebrate the 10th Anniversary Edition of Concerto: One Night in Central Park with this exclusive YouTube screening of the full co...