admin
Watch Bas play "Barack Obama Special", "Purge", "Designer" and "Tribe" at the Tiny Desk.
More from NPR Music:
Tiny Desk Concerts:
Twitter:
Instagram:
Aug. 5, 2019 | Sidney Madden -- Back in January, Dreamville, one of rap's most formidable artist-run labels, invited a broad selection of hip-hop artists and creators to Atlanta to create the label's third compilation album, Revenge of the Dreamers III — and with Bas being one of Dreamville's most reliable wordsmiths, he was, naturally, part of that momentous camp.
But, as he was smack dab in the middle of recording his verses for ROTD3, the rapper had to hop on a plane to Washington D.C. — he had a performance date he just couldn't pass up.
"Let's get it!," Bas exclaimed, after walking straight off the plane and into his Tiny Desk concert. With only a brisk run-through with his band and back-up vocalist, Mereba, the Paris-born, Queens-bred MC delivered an energetic and comical set to an office full of fiends (Bas' endearing term for his fans, which doubles as a clothing line.)
"My new neighbor's mad cool. So shout out to Peggy," Bas joked mid-set, clarifying that the lyrics in his song "Barack Obama Special," about hating his neighbors, were written in the past. "Peggy be picking up my mail when I'm on tour."
Just like his lyrically impressive and sometimes dance-inducing Tiny Desk — peep his headbanging and seated sambas throughout — Bas always balances his bravado with a relatable sense of humility. The songs performed provide a sample of his third studio album, Milky Way, a project that charts his story through the music industry thus far, taking stock of his strides and setbacks along with way. "It's all in the timing / I had to get low, I had to get low," he sings on the chorus of "Tribe."
SET LIST
"Barack Obama Special"
"Purge"
"Designer"
"Tribe"
MUSICIANS
Bas : lead vocals; Ron Gilmore: keys, vocals; Justin Jackson: keys, vocals; Nathan Foley: guitar; Johnathon Lee Lucas: drums; Mereba: vocals
CREDITS
Producers: Sidney Madden, Morgan Noelle Smith; Creative Director: Bob Boilen; Audio Engineer: Josh Rogosin; Videographers: Morgan Noelle Smith, Kimani Oletu, Kara Frame, CJ Riculan; Associate Producer: Bobby Carter; Production Assistant: Adelaide Sandstrom; Photo: Amr Alfiky/NPR 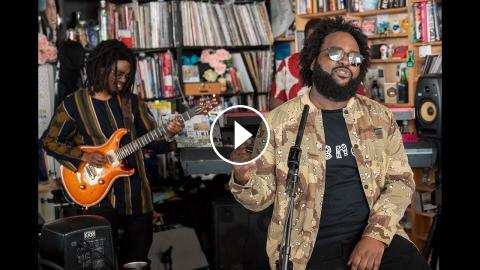