Britten Goes Back To Brooklyn With Nicholas Phan

admin
Composer Benjamin Britten, whose 100th birth anniversary falls on Nov. 22nd, is so deeply associated with his native England that he's on a new 50-pence coin issued by the Royal Mint. This British cultural icon felt so strongly his music should be of a particular place that he set down roots in the seaside town of Aldeburgh, England and stayed there for nearly 30 years until his death in 1976. But he had a surprising two-year sojourn living far from home — in a boisterous, bohemian group house in Brooklyn.

Coaxed to the borough in 1939 by a friend, poet W.H. Auden, Britten and his longtime partner, tenor Peter Pears, moved into 7 Middaugh Street in Brooklyn Heights (an address long claimed by the Brooklyn-Queens Expressway). Their housing situation there could only fairly be described as bohemian. Along with Auden, the house's revolving cast of residents included novelist Carson McCullers, composer and writer Paul Bowles, and burlesque dancer Gypsy Rose Lee.

So in hopes of evoking something of that 1930s Brooklyn boho vibe, we invited an extremely fine young American tenor Nicholas Phan (pronounced "paan"), who's become a champion of Britten's vocal music, to return to Brooklyn on Britten's behalf, accompanied by harpist Sivan Magen. We shot this Field Recording at 70 Fox House, a communal house in the Fort Greene neighborhood not all that far from where Britten and Pears lived and made their own art. Phan chose arrangements of three folk songs that Britten made in 1976. Witty and surprising, these songs are full of odd — but beautifully moving — harmonies and textures. It's a perfect match for Britten and Brooklyn. --ANASTASIA TSIOULCAS

"Lord! I married me a wife"
"She's like the swallow"
"Bird Scarer's Song"

Britten Goes Back To Brooklyn With Nicholas Phan 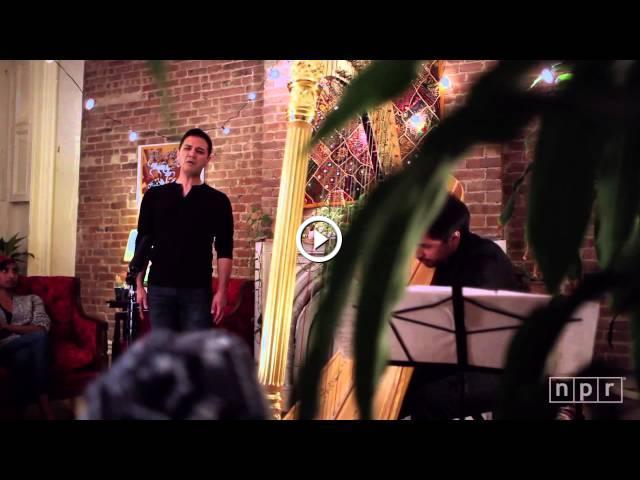 Composer Benjamin Britten, whose 100th birth anniversary falls on Nov. 22nd, is so deeply associated with his native England that he's on a new 50-pen...