admin
Watch Brownout play "Somewhere To Go", "Nain" and "You Don't Have To Fall" at the Tiny Desk.
More from NPR Music:
Tiny Desk Concerts:
Twitter:
Instagram:
Jan. 10, 2020 | Felix Contreras -- There must be something in the water down in Austin, Texas, because as soon as Brownout started playing behind the Tiny Desk, it was pretty obvious that a deep musicality is just a fact of life for Austin bands.
The slow groove of the opening song, "Somewhere To Go," is punctuated by an old-school R&B horn section that's deceptively simple and emblematic of the power of their concept and spirit. The intricate interplay of the baritone sax, guitar, bongos and drums launch the second cut, "Nain," into another down-tempo burner, with lyrics in Spanish about being different and not fitting in and seeing that as a positive. The band closed with "You Don't Have To Fall," leaning into old-school Tower of Power horns that made quite a few heads dip and hips shake in our corner of the NPR building, highlighted by guitarist Beto Martinez's solo.
One of the things you need to know about this band is that they can change traditions or genres almost on a dime. The core members dip into soul, Latin funk, a form of Peruvian cumbia called chicha, and funk covers of both Black Sabbath and Public Enemy. What each configuration has in common is the almost telepathic bond the band has developed after 15 years of working stages across the country. As you can see on the video, it's so infectious that Prince once used them for a while as a back-up band.
Like I said, there must be something in the water in Austin. Watch the video and see for yourself.
SET LIST
"Somewhere To Go"
"Nain"
"You Don't Have To Fall"
MUSICIANS
Alex Marrero: vocals, percussion; Beto Martinez: guitar; Greg Gonzalez: bass; Matthew "Sweet Lou" Holmes: congas; John Speice: drums; Peter Stopschinski: keys; Mark "Speedy" Gonzales: trombone; Joshua Levy: saxophone; Gilbert Elorreaga: trumpet
CREDITS
Producers: Felix Contreras, Morgan Noelle Smith; Creative director: Bob Boilen; Audio engineers: Josh Rogosin, Patrick Boyd; Editor: Jack Corbett; Videographers: Morgan Noelle Smith, Kaylee Domzalski, Maia Stern, Beck Harlan; Associate producer: Bobby Carter; Executive producer: Lauren Onkey; VP, programming: Anya Grundmann; Photo: Cameron Pollack/NPR 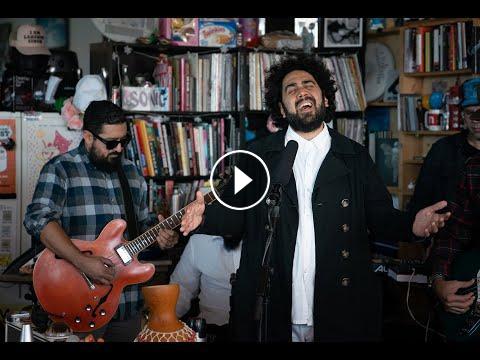 Watch Brownout play "Somewhere To Go", "Nain" and "You Don't Have To Fall" at the Tiny Desk.More from NPR Music: Tiny De...