Bobby Carter | January 19, 2021
If Gabriel Garzón-Montano's solo Tiny Desk back in 2017 was an exercise in restraint and vulnerability, his home set is the polar opposite. It beams ingenuity and unveils multiple layers, figuratively and literally. Taking advantage of of the rare opportunity to gather musicians in quarantine times, he says "It's like being a child who's allowed to do what they always wanted to do when they didn't wanna get up for school, and it's also felt like an adult who didn't know what to do at 3 p.m. on a Tuesday afternoon. I'm focusing on oscillating between those states with ease."

That sounds like the same approach he applied to his latest album, last year's genre-snubbing Agüita. In this performance he brought the full band, sporting all white from mask to toe and bringing to life all the sonics we hear on the record. Garzón-Montano morphs into three different characters from Agüita and stretches the boundaries even more, adding salsa flavor to "Muñeca" and delivering some bonus bars on the set opener, "With A Smile." 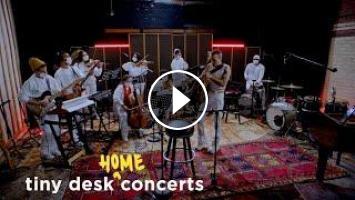