admin
June 13, 2018 | Sidney Madden -- GoldLink is a man of the people. As a D.C. native, the skinny, stylish rapper acted as if his Tiny Desk performance was a family reunion and took the opportunity to invite everybody and their cousin in as his guests.
To mark the moment, Link wore a crisp T-shirt reading 'I Told You So' — a nod to the haters, no doubt — and jumped around his discography to perform cuts from each of his three projects: "Bedtime Story" from 2014's The God Complex, "Dark Skin Women" from 2015's And After That, We Didn't Talk and finally "Some Girl" and "Pray Everyday (Survivor's Guilt)" from 2017's At What Cost. But instead of the usual Steve Lacy or Kaytranada-aided beats, Link delivered his verses accompanied by a smooth six-piece band and two velvet-voiced singers. (Link's longtime producer Louie Lastic plays bass for the entire set.)
"Thank y'all for being here. It's mad overwhelming lowkey," Link admitted with a laugh at the audience that had flocked in his honor. As he loosened up, Link made time for bossa nova steps and shoulder shimmies, and by the end of the four-song set, he had the crowd swaying as well.
Last year was a significant one for the 25-year-old rapper once considered one of hip-hop's oddballs. His incorporation of electro-bounce beats into tongue-twisting rhymes earned Link a web following back in 2013, but it was just last year when he finally heard his voice on national radio thanks to the breakout track "Crew." The subdued stinger produced by Teddy Walton and featuring fellow D.C. area natives Brent Faiyaz and Shy Glizzy showcased Link's nonchalant cadence in a digestible fashion. While "Crew" enjoyed a slow burn — gradually accumulating streams and spins as a summer song in 2017 and earning the artist his first Grammy nomination earlier this year in the category of Best Rap Performance — it also positioned him as a new musical savior of his city. Link used this spotlight to draw attention to D.C.'s overlooked influence on popular music. On his album, At What Cost, Link traces the history of go-go, gun violence and gentrification in his hometown. As the poet recited before "Pray Everyday (Survivor's Guilt)," Link's goal through his music is "for the DMV to reign for many moons."
Set List
"Bedtime Story"
"Dark Skin Women"
"Some Girl"
"Pray Everyday (Survivor's Guilt)"
CREDITS
Producers: Bobby Carter, Morgan Noelle Smith; Creative Director: Bob Boilen; Audio Engineer: Josh Rogosin; Videographers: Morgan Noelle Smith, Kara Frame, Maia Stern, Beck Harlan; Production Assistant: Amal Handley; Photo: Claire Harbage/NPR. 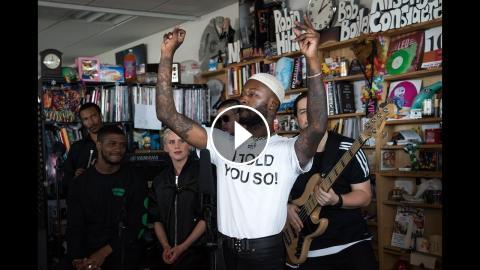