Aditya Gadhvi, a young and very talented artist who won Gujarat's highest TRP gaining show "Lok Gayak Gujarat", rediscovering the Indian Folk Music and its essence. He Has performed with A. R. Rahman in live shows as his troop member in Dubai, Vadodara etc and have sung for A. R. Rahman in the movie "Lekar Hum Deewana Dil" in background score, he has also done playback singing for the movie "Kamasutra 3D" for 2 songs, both the songs sung by Aditya were shortlisted for Oscar nominations in 2014. He is now coming up with a single titled "Hansla" with his musician group titled "Folk Box".

Aditya Gadhvi and group "Folk Box" is a group of young musicians who spread peace and love through folk music, they chose to transform and spice up the forgotten folk music and the "Hansla" is start of their journey, its an ultimate fusion which will you let you feel the joy of our culture. 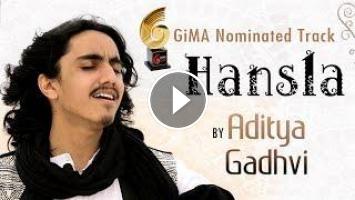