Ann Powers | October 6, 2020
The first time I heard Little Big Town, I knew they needed to play the Tiny Desk. This was eight years ago, when the country foursome made a splash with the playful hit "Pontoon." The easy fun these friends projected won me over, but I stayed for the crazy powerful harmonies. I soon discovered that Little Big Town had been perfecting its vocal blend for more than a decade – and the group just got better, and more adventurous, as its star rose. In 2014 came the spine-tingling ballad "Girl Crush," in 2017 the Taylor Swift collaboration "Better Man." Both songs won Grammys. This year Little Big Town topped itself with its ninth album, Nightfall, a perfect balance of meditative moments and bangers that extends its reign as country's greatest contemporary quartet.

Little Big Town was making plans to appear at the Desk before the pandemic descended; instead, the members woodshedded separately, with married couple Jimi Westbrook and Karen Fairchild taking some beach time and Kimberly Schlapman and Phillip Sweet focusing on their own families. Returning to Nashville as the school year began, they gathered their expert band together (including a surprise guest trumpeter) for a career-spanning session in Fairchild and Wesbrook's living room. Early on, Fairchild notes that this is the longest the singers have spent apart in 25 years. You wouldn't know it. From the lush balladry of "Nightfall" to the party fun of "Wine, Beer, Whiskey" – and onward through absolutely chills-inducing versions of two of their biggest hits – Little Big Town shows how four voices can become one, and so much more than the sum of the parts. 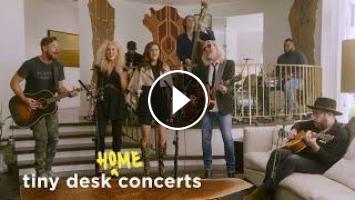