AVA
Tom Huizenga | January 12, 2023
Marc-André Hamelin has a marvelous, curious mind. While we chatted before his Tiny Desk concert, he snooped around the CD shelves near my desk, commenting on a few rarities and sharing his own eclectic tastes, including a crazy YouTube mashup of all 15 Shostakovich symphonies stacked on top of each other.

The Boston-based Montreal native is regarded as one of his generation’s most technically astounding pianists, but he’s no empty virtuoso. His interpretations are probing, precise and warm — keen to bring out humor when necessary. He routinely performs the world’s most treacherous repertoire with his characteristic ease. I’ve witnessed him practically reduce a concert grand to matchsticks, and I’ve heard him tenderly caress a late Schubert sonata.

Hamelin’s colossal breadth of repertoire is on display in this smart set of pieces. He begins in the 18th century with the off-kilter antics of C.P.E. Bach — a rondo that stops, starts and swerves with the spirit of improvisation. His limpid rendition of William Bolcom’s “Graceful Ghost Rag” (from 1970) emphasizes the bittersweet harmonies with unhurried elegance.

Hamelin saves the rock and roll for last — a piece of his own based on what he calls “possibly the oldest popular song in existence.” Filtered through his lightning-fast fingers, the medieval tune “L’homme armé” struts mischievously, cascades swiftly and expands to a thunderhead of glorious sound. 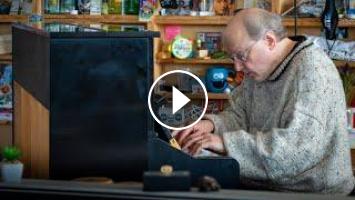 Tom Huizenga | January 12, 2023 Marc-André Hamelin has a marvelous, curious mind. While we chatted before his Tiny Desk concert, he snooped around the...