admin
► Listen on SPOTIFY/APPLE MUSIC/AMAZON: ThePianoGuys.lnk.to/HappierAW
► WE'RE ON TOUR!
► TPG APPAREL:
► GET TPG SHEET MUSIC:
►Watch BEHIND THE SCENES in TPG ALL ACCESS:
We loved digging into Happier’s sticky melody and rhythms, and as we did we discovered something we didn’t expect. An innate nostalgic feeling. And that could be a big part of the reason why Dvorak’s American String Quartet worked so well as a mashup melody. When I (Steven Sharp Nelson) was just hitting high school and struggling to stay motivated in my cello practice, my father did something ingenious. He recruited two very sharp, very cute girls and put them opposite me and my brother in a newly formed string quartet. Suddenly, I was much more motivated to practice! And not only that, a whole new world of music opened up to me. Hearing and performing the intricate energy of some of classical music’s greatest works in such a fundamental setting — where four musicians literarily depend on each other to complete the chord, catalyzed my desire to compose music. And at the center of that newfound passion was this piece of music: Dvorak’s American String Quartet. Wow. He really knew how to write for the cello. No longer was I lulled into a subdivided bass-note stupor! There were SOLO lines that soared, syncopation, polyphony, there was rapture, serenity, and there was fire in this music! It was like watching a dramatic love-story-turned-action movie for the first time. We chose the second movement’s incomparably stirring, lyrical melody to play off of Marshmello and Bastille’s pithy hooks. And it’s only fitting. Because after experiencing Dvorak, as a cellist, I was much Happier.
Produced, arranged, performed, mixed and mastered by Al van der Beek and Steven Sharp Nelson of The Piano Guys
Check out our Top 10 videos!
____________________________
A Thousand Years (Christina Perri)
Disney's Let It Go / Vivaldi's Winter (Frozen / Four Seasons)
Beethoven's 5 Secrets (5th Symphony / OneRepublic)
Titanium / Pavane (David Guetta / Faure)
What Makes You Beautiful (One Direction)
Peponi / Paradise African Version (Coldplay)
Cello Wars (Star Wars)
Fight Song / Amazing Grace - Scotland Castle Eilean Donan (Rachel Platten / John Newton)
Story of My Life (One Direction)
Watch us play atop the Wonders of the World!
____________________________
Great Wall of China:
Christ Redeemer:
Chichen Itza:
Petra:
(MORE to come)
Who are The Piano Guys? 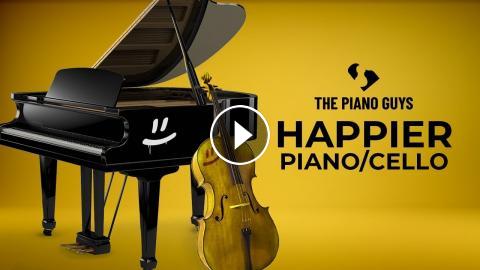 ► Listen on SPOTIFY/APPLE MUSIC/AMAZON: ThePianoGuys.lnk.to/HappierAW► WE'RE ON TOUR! ► TPG APPAREL: ► GET TPG SHEET MUSIC: ►Watch BEHIND THE SCENES i...