admin
Feb. 13, 2019 | Bob Boilen -- Mountain Man is the perfect band for a Tiny Desk concert. These three women make the most intimate music; and behind the desk, the voices of Amelia Meath, Molly Erin Sarlé and Alexandra Sauser-Monnig were the stars. Adorned by only light, rhythmic acoustic guitar, they sing songs that conjure a simpler life: dogs, friends, moonlight, sunlight, skinny dipping, beach towels and sand.
These dear friends have known each other for more than ten years, since their college days in Vermont. They released their first album in 2010 called Made The Harbor and only recently had a follow-up with the pleasantly surprising, 2018 fall release of Magic Ship.
In the eight years between Mountain Man records, Amelia Meath went on to create Sylvan Esso with Nick Sanborn. Molly Sarlé, meanwhile, was in a meditation center in California — at a cliffside trailer in Big Sur — and worked on her own, beautiful solo album, which is due out soon. And Alexandra Sauser-Monnig worked with Hiss Golden Messenger, released her own music under the name ASM and has a new record coming as well.
But there's a true kinship that happens in this trio. Things get quiet, sometimes funny and playful or, at moments, awkward, especially when they talk about "savory oatmeal." Mountain Man is endearing. There's a tour about to happen, and hopefully they won't vanish after that for another eight years. There's no other band like them.
Set List
"Rang Tang Ring Toon"
"Moon"
"Stella"
Musicians
Amelia Meath: vocals; Molly Sarlé: vocals, guitar; Alexandra Sauser-Monnig: vocals, guitar
Credits
Producers: Bob Boilen, Morgan Noelle Smith; Creative Director: Bob Boilen; Audio Engineer: Josh Rogosin; Videographers: Morgan Noelle Smith, Kimani Oletu; Associate Producer: Bobby Carter; Production Assistant: Adelaide Sandstrom; Photo: Amr Alfiky/NPR 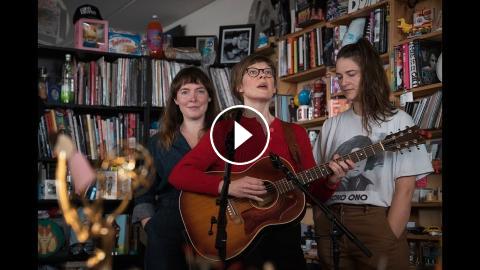 Feb. 13, 2019 | Bob Boilen -- Mountain Man is the perfect band for a Tiny Desk concert. These three women make the most intimate music; and behind the...