admin
Nov. 10, 2017 | Bob Boilen --For Laura Burhenn, 2016 was a tough year and she wasn't alone. We lost David Bowie, Leonard Cohen, Prince (and so many more beloved artists). And then there were the elections and subsequent inauguration, which were devastating to many. But what transpired next for anyone dismayed by those events was inspiring: The Women's March united many who were in despair, while giving purpose and focus to what for them was an unthinkable outcome in the election of Donald Trump.
Then came the songs – nine new ones Laura wrote with Patrick Damphier, inspired by the many marches around the country, listening to the news, seeing social media, talking to friends and taking it all in. The result is The Mynabirds' politically charged 2017 album Be Here Now.
I first met Laura Burhenn ten years ago for a songwriting project she did with John Davis, her then bandmate in the duo Georgie James, here at NPR called Project Song. I was thrilled to discover her talent. Her current band, The Mynabirds, are Tiny Desk alum, Laura having played her first Tiny Desk Concert in the spring of 2010.
I'm not one to repeat artists at the Tiny Desk. I'm more into discovering and challenging new bands to play in this intimate and awkward setting. But this project was so different and Laura had ideas about how to make it even more special from what she'd done back in 2010, so I couldn't resist.
While recording this album, a travel ban was issued affecting six Muslim-majority countries. She wrote a song for refugees inspired by the ban and got in touch with friends back in Omaha at the Refugee Empowerment Center. It is there she learned of the Umoja Choir whose members include resettled refugees from The Congo, Rwanda, Tanzania, Uganda and Zambia and they ended up singing on her record. Laura also started a GoFundMe campaign for them to record their songs. Now some of those choir members have come to the Tiny Desk for a powerful set of songs. They're joined by another Tiny Desk alum: Jessica Lea Mayfield. It's an inspired project that I'm excited to share.
Set List
"Golden Age"
"Shouting At The Dark"
"Hold On"
"Wild Hearts"
MUSICIANS
Laura Burhenn; Emily Moore; Patrick Damphier; Jessica Lea Mayfield; Diendonne Manirakiza; Michael Boggs; Eric Esron; Alexia Kauffman; Adriana-Lucia Cotes
CREDITS
Producers: Bob Boilen, Morgan Noelle Smith; Creative Director: Bob Boilen; Audio Engineer: Josh Rogosin; Videographers: Morgan Noelle Smith, Niki Walker, Alyse Young, Nicholas Garbaty; Assistant Editor: Alyse Young; Production Assistant: Salvatore Maicki; Photo: Jennifer Kerrigan/NPR
For more Tiny Desk concerts, subscribe to our podcast. 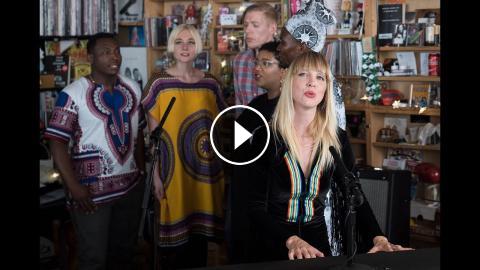