AVA
We've been filming Tiny Desk concerts for more than 10 years. While revisiting our archives, we discovered that some of our earliest concerts never made it to YouTube!
Watch Nick Lowe’s Tiny Desk concert from 2010: https://www.npr.org/2010/12/08/130870090/nick-lowe-tiny-desk-concert

Few musicians get better with age, but Nick Lowe is an exception. I've been following Lowe's music since his days with the country-rock band Brinsley Schwarz in the early 1970s. He wrote one of his best-known tunes with that band: "(What's So Funny 'Bout) Peace, Love, and Understanding?" But it wasn't until he left Brinsley Schwarz that people began hearing his name, first with the Dave Edmunds project Rockpile. (Edmunds produced one of the last Brinsley Schwarz records, the one with "What's So Funny.")

But what put Nick Lowe on the map was his work with the innovative upstart label Stiff Records, as well as his efforts as a producer on that label for a young unknown named Elvis Costello. Lowe would produce the first five Costello records, and it was the latter's rendition of "(What's So Funny 'Bout) Peace, Love, and Understanding?" that made that song the pop classic it is.

For Lowe's fans, the solo records he'd make were a constant source of joy and wit. Songs such as "I Love the Sound of Breaking Glass," "Cruel to Be Kind" (another tune written during the Brinsley Schwarz days), "Little Hitler" and "Heart of the City" were all part of a new breed of pop music that felt good without making listeners feel stupid. In other words, this is more than just catchy music.

Lowe has said that one of his biggest fears is growing old doing the same shtick he did as a handsome young lad. In 1998, he put out an album that set the stage for the gracefully aging Nick Lowe: Dig My Mood. To get a taste of that record, check out the first song in this Tiny Desk Concert; it's a song about a bitter old man titled "Man That I've Become," and its words are vintage Lowe: "His heart's a prune / when it once was a plum / If you know him / that's the kind of man that I've become."

At 61, Nick Lowe is part crooner, part country and a little crotchety, but with a heart of pure pop. He's lost nothing, and for proof, don't miss "House for Sale," a brand-new, not-yet-released song that's as affecting as anything Lowe has written.

Set List:
"Man That I've Become"
"Rome Wasn't Built In A Day"
"All Men Are Liars"
"House For Sale" 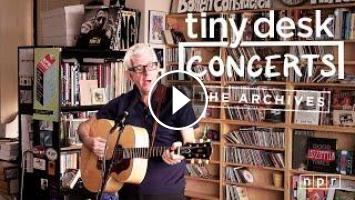