Sam Yellowhorse Kessler | November 10, 2021
For Native American Heritage Month, we wanted to feature Indigenous musicians that break out of the preconceptions that many have of Indigenous music. Raye Zaragoza does just that, planting herself firmly in the folk genre, a tradition often reduced to white musicians with acoustic guitars. She pushes back on the narrative of folk music being for a certain type of person in her song “They Say,” in which she sings specifically about a time she realized at one of her own concerts that she probably couldn’t have afforded to be a member of the audience. “They say that folk music’s for the elite,” she sings, “the wise and the old with a college degree.”

Zaragoza is a natural performer, able to go big -- like on her 2020 album, Woman in Color -- or pare it all back, as she does in this Tiny Desk (home) concert. Her music reminds me of Ondara, an artist working within the troubadour tradition of storytelling, but unafraid to deliver incisive social and political messages. After all, what is folk music without something to work toward? “Change is a choice,” Zaragoza sings, “and it starts with me.” 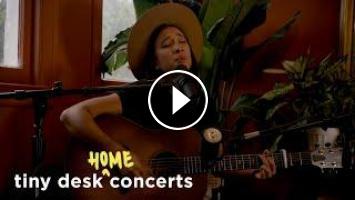