admin
How do you pronounce RDGLDGRN? Easy, it's just Red Gold Green. Clean and simple, no vowels, no fluff — just like the band's music. Listen and you'll hear a striking mix of rock, hip-hop, funk, go-go and international sounds, fused with energy and humor.
RDGLDGRN is based in the D.C. suburb of Reston, Va. Local music fans know the band well, and have enjoyed watching it win fans across the country and around the world. A few years ago, I heard its first album (Red, Gold, Green) and fell in love with RDGLDGRN's style. It's not only because Dave Grohl played drums in most of the songs, while Pharrell Williams cowrote and co-produced "Doing The Most." I loved the group's fresh sound, and how its members rapped over the top of real drums. Their catchy hooks and harmonies quickly grabbed my attention.
When planning for RDGLDGRN's Tiny Desk show, many details were up for consideration: time, date, technical arrangements, and so on. Of biggest concern, though, was how the group would fit into the scaled-down setting of our space. If you go to a RDGLDGRN show, you'll see a traditional stage set-up with a full complement of instruments. In the venue, you can hear and feel the excitement of a full-blown band and a full drum set; heads bob, hands wave, bodies move, and you don't find a single person in the audience standing still. It wouldn't be easy to contain the energy in such a small space.
The colors in the band's name represent RDGLDGRN's members: Red (Marcus Parham), Green (Pierre Desrosiers) and Gold (Andrei Busuioceanu), who wear their respective colors all the time, even when offstage or away from the camera. In light of their recent experimentation with Brazilian-style percussion over acoustic versions of their songs, they decided that an all-acoustic set infused with Brazilian vibes would make for the perfect Tiny Desk concert. After performing "Karnival," the group's latest single, RDGLDGRN treated us to unplugged versions of a handful of its best-known songs.
"Karnival" is available now:
iTunes:
Amazon:
Set List:
"Karnival"
"Chop U Down"
"Doing The Most"
"No Pixar" (Freestyle)
Credits:
Producers: Suraya Mohamed, Niki Walker; Audio Engineer: Josh Rogosin; Videographers: Niki Walker, Morgan McCloy; Production Assistant: Anna Marketti; Photo: NPR.
For more Tiny Desk concerts, subscribe to our podcast: 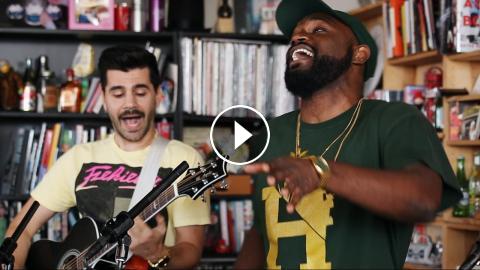 How do you pronounce RDGLDGRN? Easy, it's just Red Gold Green. Clean and simple, no vowels, no fluff — just like the band's music. Listen and you'll h...