AVA
We've been filming Tiny Desk concerts for more than 10 years. While revisiting our archives, we discovered that some of our earliest concerts never made it to YouTube!
Watch Sarah Siskind’s Tiny Desk concert from 2009: https://www.npr.org/2009/07/27/106990375/sarah-siskind-tiny-desk-concert

Like many of Sarah Siskind's fans, I'd never heard of her until Bon Iver started covering her song "Lovin's for Fools" at its shows — sometimes with the band Bowerbirds, sometimes on its own and sometimes with Siskind herself singing along. Like a few other Siskind devotees, Bob Boilen had never heard of the Nashville singer-songwriter until her album Say It Louder showed up on his desk a few months ago; when he put it on, he was instantly smitten with the song "Falling Stars," which he played on All Songs Considered.

If you've never heard of Sarah Siskind, click the video link on this page, and you're likely to praise her as effusively as Bob and I do at every opportunity. It's no faint praise to suggest that Bon Iver's version of "Lovin's for Fools" can't quite live up to Siskind's original: Hers is so wrenching, so infused with wounded grace, that it's essentially untouchable. Her strong but vulnerable voice, her impeccable phrasing and her gently masterful guitar work make her an underexposed treasure.

In this charming Tiny Desk concert, Siskind performs two of the highlights from Say It Louder — "Falling Stars" and the title track — before closing with a requested "Lovin's for Fools." Each song finds her concocting a heady cocktail of tender beauty and winsome regret, while employing a voice that's at once honeyed and raw. 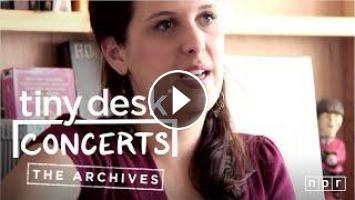