The Best of Schubert

AVA
???? Buy the MP3 album on the Official Halidon Music Store: http://bit.ly/3w4MMaz
???? Listen to our playlist on Spotify: http://bit.ly/TheBestOfClassicalMusic

???? The HalidonMusic Sync Licensing platform is now live at https://licensing.halidonmusic.com
???? Subscribe to our newsletter and get a 50% discount on the Halidon Music Store: http://bit.ly/HalidonNewsletter

☕ If you like what we do and would like to support us, you can now buy us a coffee: https://www.buymeacoffee.com/halidonmusic. Donations will go towards keeping the YouTube channel going and funding new recording sessions with our amazing team of artists. Thank you! ????

The Best of Schubert
Tracklist:

Franz Peter Schubert (1797-1828) was an Austrian composer of the late Classical and early Romantic eras. Despite his short lifetime, Schubert left behind a vast oeuvre, including more than 600 secular vocal works (mainly lieder), seven complete symphonies, sacred music, operas, incidental music, and a large body of piano and chamber music.

Born in the Himmelpfortgrund suburb of Vienna, Schubert showed uncommon gifts for music from an early age. In 1808 he became a pupil at the Stadtkonvikt school, where he became acquainted with the orchestral music of Haydn, Mozart, and Beethoven. He left the Stadtkonvikt at the end of 1813, and returned home to live with his father, where he began studying to become a schoolteacher. Despite this, he continued his studies in composition with Antonio Salieri and still composed prolifically. In 1821, Schubert was admitted to the Gesellschaft der Musikfreunde as a performing member, which helped establish his name among the Viennese citizenry. He gave a concert of his own works to critical acclaim in March 1828, the only time he did so in his career. He died eight months later at the age of 31.

Appreciation of Schubert's music while he was alive was limited to a relatively small circle of admirers, but interest in his work increased greatly in the decades following his death. Mendelssohn, Schumann, Liszt, Brahms and other 19th-century composers discovered and championed his works. Today, Schubert is ranked among the greatest composers in the history of Western music and his work continues to be admired.

The Best of Schubert 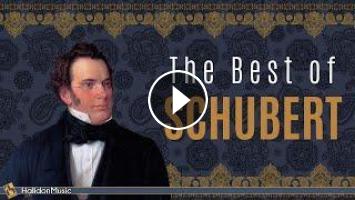 ???? Buy the MP3 album on the Official Halidon Music Store: http://bit.ly/3w4MMaz ???? Listen to our playlist on Spotify: http://bit.ly/TheBestOfClass...