admin
Bob Boilen | July 24, 2017 -- The Shins have been a constant part of NPR's musical DNA for much of the 21st century. The group's poetic pop has shown up in something like 25 stories on our website, not just because many of us are longtime fans, but also because our listeners love them. Stories on our site include: The Best CDs of 2003: Listeners' Picks, The Shins In Concert from 2012, Song Premiere: The Shins And Zach Braff Reunite, a recent interview on All Things Considered and so many more. It's remarkable that there's never been a Tiny Desk Concert from The Shins until now.
In celebration of the band's fifth studio album, 2017's Heartworms, singer and guitarist James Mercer, the emotional and creative center of The Shins, came to NPR to perform a handful of songs that included two new tracks and one that reached back to 2003 from the album Chutes Too Narrow. It's a moving performance with just James on guitar, no band, no amplification - simple and perfect.
Heartworms is available now.
iTunes:
Amazon:
Set List
"Mildenhall"
"The Fear"
"Young Pilgrims"
Musicians
James Mercer (vocals, guitar)
Credits
Producers: Bob Boilen, Niki Walker; Audio Engineer: Josh Rogosin; Videographers: Niki Walker, Tsering Bista; Video Editor: Tsering Bista; PA: Jenna Li; Photo: Claire Harbage/NPR.
For more Tiny Desk concerts, subscribe to our podcast: 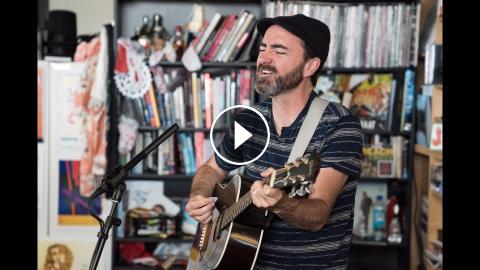