admin
There's something heartwarming about a family making music together. I'm especially sentimental when I see a father with a son, because my son and I made music in contra dance bands and Irish sessions as he grew up.
Years ago, while interviewing Jeff Tweedy before a Wilco concert, I asked him if he'd made music with his kids. He told me about going to his son Spencer's preschool class and writing a tune with all the kids; "Monkey Mess" was their final creation.
Now, all these years later, he and Spencer have put together 20 songs as Tweedy for a new record called Sukierae; the material is strong, personal and bare. Spencer is a great drummer who grew up playing in the basement of a Chicago bar called Lounge Ax (which his mom, Susie Miller, co-owned), and he's got a group of his own called The Blisters.
The father and son usually perform together with a full-band lineup. But here at the Tiny Desk, we've stripped it down to just the men who bear the Tweedy name — and share the family bond that helps make their music together beautiful.--BOB BOILEN
Set list:
"Wait For Love"
"New Moon"
"Low Key"
"You Are Not Alone"
Credits:
Producers: Bob Boilen, Denise DeBelius; Editor: Maggie Starbard; Audio Engineer: Kevin Wait; Videographers: Denise DeBelius, Maggie Starbard; Production Assistant: Nick Michael; photo by Nick Michael/NPR 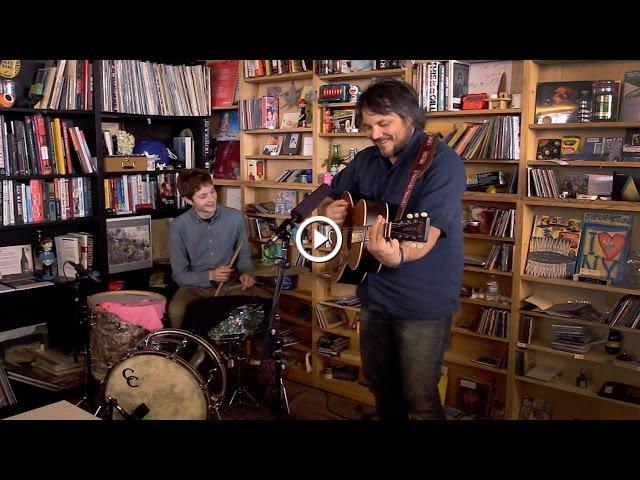 There's something heartwarming about a family making music together. I'm especially sentimental when I see a father with a son, because my son and I m...