AVA
We've been filming Tiny Desk concerts for more than 10 years. While revisiting our archives, we discovered that some of our earliest concerts never made it to YouTube!
Watch Yo La Tengo’s Tiny Desk concert from 2013: https://www.npr.org/2013/04/15/176905752/yo-la-tengo-tiny-desk-concert

Otis Hart | July 15, 2013
It's not often that someone on the NPR Music team gets to see his or her favorite band perform a Tiny Desk Concert. After all, you can only have one favorite band, and NPR Music supports a staff of about 20; that means that, of the 250-plus Tiny Desk Concerts we've produced, fewer than 10 percent could possibly have qualified for favorite-band status.

All of which is to say that my favorite band, Yo La Tengo, actually played a Tiny Desk Concert. For those who aren't familiar with the Hoboken trio, Yo La Tengo's members — guitarist Ira Kaplan, drummer Georgia Hubley and bassist James McNew — have been doing their own thing (which, granted, can sometimes sound like The Velvet Underground) for more than 20 years. The band epitomizes, sheepishly, why so many were drawn to indie rock in the 1990s: the casual resolve to be yourself and let everything else sort itself out.

The Yo La Tengo sound has evolved quite a bit since Hubley and Kaplan first jammed together in 1984; the feedback has subsided as they've grown older, replaced by a more contemplative vibe. The release of the band's 13th album, Fade, earlier this year marked a natural time to invite Yo La Tengo behind Bob Boilen's desk for an acoustic set.

SET LIST
"Is That Enough"
"Tears Are In Your Eyes"
"Ohm" 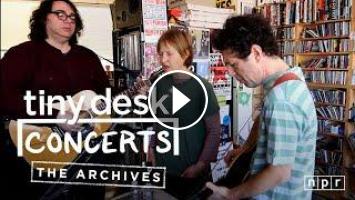