admin
Bob Boilen | April 24, 2017 — As the primary booker of the Tiny Desk Concerts, I have this self-imposed rule: No artist can come back for a second visit unless there's something wholly different about what they're doing. The first time alt-J played the Tiny Desk, in 2012, they came as a four-piece; electric guitar, bass, keyboards and drums. They were a pretty new band, their album had been out a few months and they were playing in clubs for a couple hundred people, not much more.
In the five years since the band visited it has found quite a few new fans. When I heard cuts from the newest album Relaxer a few months ago I flipped and tried to think of a way to bring them back. So I wrote them, saying I'd love to have them again but that it would have to be wholly, out-of-the-box different. I told them I'd hire a brass band, an African kora player if need be, a string section... They took up the challenge. They told me to find a cellist and two violinists.
I wrote to my friend Carol Anne Bosco, a cellist, who turned out to be a huge fan of the band and helped find two violinists for the performance. About four days before the performance the band sent the string parts, written by their friend Will Gardner.
On Monday morning, the English band met the American string players and they all gathered behind my desk. As they worked their way through a first pass at "Three Worn Words," I noticed them and relieved — alt-J had actually never heard the string arrangements, this was the first time. They sounded beautiful. By noon, NPR employees and friends gathered around my desk to witness this astonishing concert from alt-J, including two new songs and two old favorites. Magic.
Relaxer is available for pre-order now:
iTunes:
Amazon:
Set List
"3WW"
"In Cold Blood"
"Warm Foothills"
"Taro"
Musicians
Joe Newman (guitar, vocals); Thom Green (drums); Gus Unger-Hamilton (keys, vocals)
String Arrangements
Will Gardner
Guest Musicians
Carol Anne Bosco (cello); Kristin Bakkegard (violin); Paul Bagley (violin)
Credits
Producers: Bob Boilen, Niki Walker; Audio Engineer: Josh Rogosin; Videographers: Niki Walker, Morgan Noelle Smith, Bronson Arcuri; Production Assistant: A Noah Harrison; Photo: Marian Carrasquero/NPR.
For more Tiny Desk concerts, subscribe to our podcast: 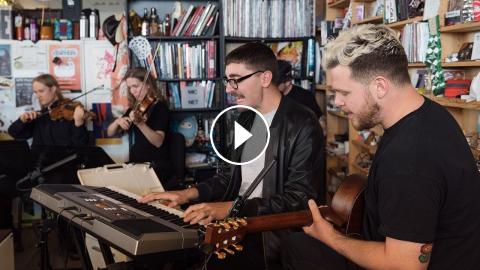 Bob Boilen | April 24, 2017 — As the primary booker of the Tiny Desk Concerts, I have this self-imposed rule: No artist can come back for a second vis...