admin
► Get The Song & Sheet Music here:
► Download or listen to all of our music!
----------------------------------------
► YOUTUBE:
► FACEBOOK:
► INSTAGRAM:
‘Twas a few nights before Christmas and all through the street,
Not a creature was stirring except this piano geek;
The lights were all hung on the houses with care,
In hopes that Jon wouldn’t play piano there;
The people were nestled all snug in their beds,
While visions of cello music danced in their heads;
And Paul in his t-shirt and Al in his boots
Had just settled down for an all night video shoot.
When out in the street arose such a clatter,
People sprang from their beds to see what was the matter
Out the windows they watched, their phones they unlocked
Was this a dream or should they call the cops?
Jon sprang from his bench, running fast as he could,
As the neighborhood dogs barked (just as they should);
But we heard him exclaim, ere he ran out of sight,
HAPPY CHRISTMAS TO ALL, AND TO ALL A GOOD NIGHT!
FUN FACTS ABOUT THIS VIDEO:
This was really filmed in the middle of the night, as you may have guessed.
500,000 Christmas lights “starred” in this display (that’s a half-million, people!!)
4,900 digital channels were utilized to...READ MORE HERE:
Credits:
I Saw Three Ships (traditional) arranged and performed by Jon Scdmidt
Recorded, mixed and mastered by Al van der Beek at TPG Studios, Utah
Video produced and filmed by Paul Anderson and Shaye Scott
Extra Drone Pilot: Ted Campbell
Video edited by Shaye Scott
Light Show courtesy of and thanks to:
Production/Controls: Jason Ellsworth and Kyle Ottman
Electrical and Lighting: Drew Buck
Additional Programming: Tom BetGeorge
And AN EXTRA SPECIAL THANK YOU to the Richardson and Smart families for lending their incredible homes for this light show and lending so much joy to thousands who park and watch them each year. (Also many thanks to their neighbors for putting up with Jon’s racket! :-)
To see the show: 1731 Hidden Valley Club Dr, Sandy, Utah 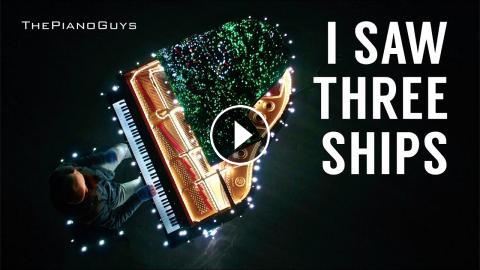