AVA
Out NOW “Opera – The Ultimate Collection”
- On Amazon: http://po.st/M1zLi4
- On iTunes: http://po.st/DHCWN5
- On GooglePlay: http://smarturl.it/BocelliUltimate_GP

Reflecting his very first love, Opera – The Ultimate Collection is the definitive collection of Andrea Bocelli’s own beloved and favorite operatic selections that have inspired his career over the years. Bocelli explains, "The main objective of this album is to draw people closer to the opera, in particular to the whole opera. So I chose the tracks that are the most engaging the first time you hear them. I hope I have made the right choice and it encourages people to discover more.”
Opera – The Ultimate Collection has been released in over 56 countries, and features prestigious figures of the classical music world including bass-baritone Bryn Terfel and soprano Barbara Frittoli, as well as such esteemed conductors as Zubin Mehta, Myung-Whun Chung, and Plácido Domingo. The album also features orchestras from all over the world, including The Israel Philharmonic Orchestra, Orchestra e coro del Teatro Massimo Vincenzo Bellini di Catania, Orchestre Philharmonique de Radio France, Orchestra Sinfonica e Coro di Milano Giuseppe Verdi to name a few.
Often credited with bringing classical music to the masses, Bocelli has always performed and released both pop and core classical material, often combining both in two separate halves of his concerts. Over the years he has also appeared in numerous opera productions including Puccini’s La Bohème, Verdi’s Macbeth and Massenet’s Werther. His ability to comfortably sing varied repertoire is evident from his best-selling discography, which includes 9 chart-topping pop albums and 14 core classical recordings to date.
Bocelli is one of the world's most popular classical artists having sold 80 million records and counting. Drawing millions in with his popular crossover appeal, Bocelli has always enthusiastically shared his passion for classical repertoire which his fans have overwhelmingly embraced. Bocelli explains "I simply enjoy sharing something so beautiful with as many people as possible." 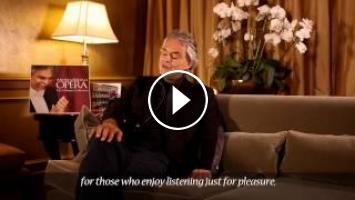