admin
Aug 28, 2017 | Stephen Thompson - Like many singer-songwriters, Jason Isbell writes music that mirrors developments in his own life. In recent years, that's thankfully included the hard-won contentment he's experienced on his path to 40: sobriety, marriage and on from there. On this summer's The Nashville Sound, the decorated Alabama-born star understandably casts his gaze toward parenthood — a job he's recently come to share with singer, fiddler and Tiny Desk veteran Amanda Shires — but expands his scope further to encompass politics, fear of obsolescence, and his place in the world. It's a gorgeous record: noble and scruffy, graceful and human.
For his Tiny Desk debut, Isbell and his band The 400 Unit performed three songs from The Nashville Sound, but their set fanned out to include lengthy bits of funny banter, a false start and an impromptu bit in which he shone a spotlight on a member of the audience. "This is like an audition and a rock show at once," he deadpanned to Ashwin Wadekar, a guest in the building who — not to spoil anything — got more than he'd likely expected from his visit to NPR headquarters.
The Nashville Sound is available now.
iTunes -
Amazon -
SET LIST
"Chaos and Clothes"
"Molotov"
"Last of My Kind"
MUSICIANS
Jason Isbell (vocals, guitar); Sadler Vaden (guitar); Amanda Shires (fiddle, backing vocals); Jimbo Hart (bass); Derry deBorja (keyboards); Chad Gamble (drums); Ashwin Wadekar (guitar on "Last of My Kind").
CREDITS
Producers: Bob Boilen, Niki Walker, Bronson Arcuri; Audio Engineers: Josh Rogosin, Jason Willetts; Videographers: Niki Walker, Tsering Bista; Production Assistant: Nick Michael; Photo: Claire Harbage/NPR.
For more Tiny Desk concerts, subscribe to our podcast. 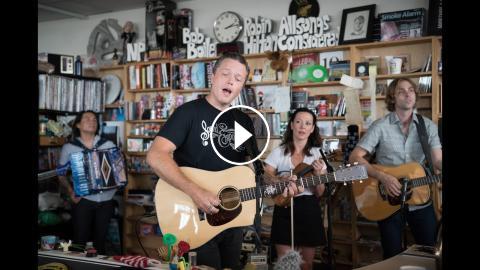 Aug 28, 2017 | Stephen Thompson - Like many singer-songwriters, Jason Isbell writes music that mirrors developments in his own life. In recent years, ...