This Tiny Desk concert was part of Tiny Desk Fest, a four-night series of extended concerts performed in front of a live audience and streamed live on YouTube, Twitter and Facebook.

Dec. 2, 2019 | Sidney Madden -- "I'm gonna get real comfortable with y'all, so I'm need y'all to get real comfortable with me," Megan Thee Stallion told the excited Tiny Desk Fest crowd as soon as she assumed her position behind the desk. After promptly switching out her patent leather heels for some fuzzy Louis Vuitton slippers, she let the room know, "Now, don't be scared to get ratchet."

From there, the Houston rapper wasted no time demonstrating why she's a superstar in the making. Megan exuded irresistible charisma, cracking jokes with the crowd and rattling off explicit bars from her award-winning mixtape, Fever, for the live audience watching on YouTube and social media.

From "Hot Girl Summer" to the platinum-selling "Cash S***," Hot Girl Meg's raunchy hits took on new life thanks to a live backing band, Brooklyn's Phony Ppl, who seamlessly blend jazz, R&B and hip-hop. Midway through the spirited set, Megan and Phony Ppl surprised the audience by premiering an unreleased collaboration, a bouncy banger titled "F***** Around." After the first verse/chorus, the adoring crowd was singing along as if they'd known the song for years.

It was the first time Megan performed with a live band in public, but then again, there's been a lot of firsts over the past year. This time last fall, Megan was rapping her heart out at local shows, balancing classes at Texas Southern University and occasionally dropping a fire freestyle video from a suburban cul-de-sac driveway. Since then, the brilliant and bodacious rapper ascended to major festival stages, became one of the most sought-after features on other stars' songs, and electrified late-night television audiences.

Though she's dubbed herself a stallion because of her tall and voluptuous frame (Meg stands 5 feet 10 inches without heels,) the 24-year-old rapper has proven herself to be a workhorse when it comes to consistency. Her viral 2019 freestyles shot her online exposure through the roof and whichever alter ego she chooses in the moment — Tina Snow, Hot Girl Meg, Stalli — she's maintained the spotlight all year thanks to a steady stream of new music, an engaging personality and her own viral social media campaign, Hot Girl Summer.

Though she's usually known for extensive twerking during her stage performances, at the Tiny Desk, Meg played up a different skill set: impeccable timing and lung capacity. "Yall talk about Meg's knees but sis breath control is pretty impressive too," one viewer tweeted out during the live video stream.

Megan's lyrical content lies in subverting established sexual dynamics and no matter the level of raunch she deploys, empowering women remains the artist's manifesto. Co-signs from all across hip-hop, from Q-Tip to Nicki Minaj to Chance the Rapper, have only bolstered her appeal and validated her bars in the eyes of the genre's cultural gatekeepers. 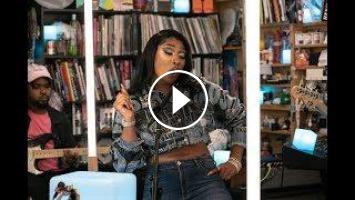