Bob Boilen | January 29, 2021
Muzz are dear, old friends who make fuzzy, thoughtful songs. So when they gathered at Reade's Old Kingston Theater in New York's Hudson Valley after seven months of separation, minus hugs and wearing masks, I trust it was joyful but also kind of awkward.

Paul Banks and Josh Kaufman have known each other since childhood. You likely know Paul Banks as the singer for Interpol; Josh Kaufman is a producer and one-third of Bonny Light Horseman. They are both friends with drummer Matt Barrick, who played a Tiny Desk concert in 2012 with his band The Walkmen.

The songs here come from the trio's excellent self-titled debut album. Josh Kaufman told me via email that "Paul was stuck in Glasgow and Matt and I were quarantining with families in Philadelphia and Brooklyn, respectively. At the very end of a long couple of days of rehearsal and taping, we — very late at night, Paul jet-lagged and the rest plain exhausted — stayed awake a little longer to try a campfire style strum along to some of the songs from our new LP. The result here is our Tiny Desk." 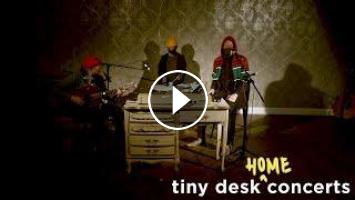