admin
► New Line of TPG Violin & Cello Bows:
► Stream “Rewrite The Stars” here:
► WE'RE ON TOUR!
----------------------------------------
► YOUTUBE:
► FACEBOOK:
► INSTAGRAM:
----------------------------------------
Introducing: a VERY special “guest artist,” who really isn’t just a “guest artist.” Rather, she’s the “BEST artist” for us to collaborate with -- Steve’s wife, Julie Nelson!
Some of the story behind the song:
“I think life comes at us in seasons. I’ve thought a lot about this. When you feel like you’re in winter, you get that feeling that everything is bleak -- and that you’ve got nothing to look forward to. The sun is gone; it’s completely overcast in your life. Those are the times for me when I’m feeling writer’s block, I’m feeling depression, I’m feeling complete struggle, just wondering whether I can even weather the storm.
Then I feel like all of us have this invincible summer within us.
It’s people, places, memories that we can draw upon that make the sunlight come out. To me, that’s what Julie is. I look back on all the memories we have together. Each and every one of them coalesce and overcome all the difficult times and the struggle. All I think about is the love I have for her and who I am because of her.
I wish I could even portray, with music, what she means to me. I can’t. There’s just not music beautiful enough. However, I want to give it my best shot. So for the first time, in all the years of doing the Piano Guys, I finally get to play beside my inspiration: My wife, Julie Nelson.”
--Steven Sharp Nelson
Watch more of the story here:
This video was filmed on the campus of the University of Utah where Julie & Steve first met.
Credits:
Rewrite the Stars from The Greatest Showman
Written by Benj Pasek and Justin Paul
The Piano Guys arrangement produced by Al van der Beek & Steven Sharp Nelson
Written by Al van der Beek, Jon Schmidt, Julie Nelson & Steven Sharp Nelson
Performed by:
Jon Schmidt: Piano
Al van der Beek: Percussion
Julie Nelson: violin
Steven Sharp Nelson: acoustic & electric cellos, cello percussion
Recorded, mixed & mastered by Al van der Beek at TPG Studios in Utah
Video produced & filmed by Paul Anderson & Shaye Scott
Edited by Shaye Scott
Lighting and stage production crew:
Richard Payson, Cole Adams, Jason Hardell, Nick Bellendir & Isaac Taylor
ClearLamp AV www.clearlampav.com/
Filming location: Marriott Center for Dance, University of Utah 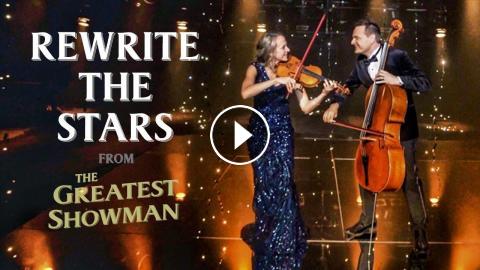