AVA
Some of you may have heard that I'm putting an album out this summer, called 'Down In A Hole'. The album in many ways is like a journal of my last twenty years. If you notice a country flavor to some of the songs that's because I've always found country music tells a story. The first song and video from the upcoming album is called 'Not Enough Whiskey'. I hope you enjoy it as much as I did recording it and as much as I do playing it live. As always, thanks for your support. - Kiefer said.

**About The Song-Album
As Kiefer Sutherland, star of 24 and countless movies, preps the release of his debut album — an Americana and country outing dubbed Down in a Hole. It's a video that purposefully showcases Sutherland, who didn't want to "hide behind a band," to prove his commitment to being a musical artist.

Today, the actor, who will be presenting at the ACM Awards this year, proves just how genuine he is in his ambitions by releasing a music video for "Not Enough Whiskey." He financed the clip himself — "Not Enough Whiskey," like many of the songs on the album, due out this summer, is personal for Sutherland.

The opportunity to tell stories through song is what attracted Sutherland to country music, a genre he got serious about during the past decade. In "Truth in Your Eyes," he tells another personal story, about witnessing one of his best friends lose a partner violently. Another, "Calling Out Your Name," reflects on a relationship he had in his early twenties that fell apart as his acting career took off.

Although he claims to be a huge rock fan, citing AC/DC, Neil Young and Paul Simon as some of his favorite artists, he is as much a fan of Kris Kristofferson ("a genius writer"), Waylon Jennings and Johnny Cash. "I could hum you every melody or guitar solo from a Pink Floyd record, but I couldn't tell you what the hell they were talking about," Sutherland says with a laugh. "There's no messing around with a Johnny Cash song, and there's something I really admire about that."

PULL THE SHADES, LOCK THE DOOR
DRAG YOUR FEET ACROSS THE FLOOR
MEMORIES HANG IN THE HALL
PULL THEM DOWN OFF THE WALL
NOW IT’S DONE, SHE IS GONE, LONG GONE

FIND A MATCH, LIGHT A SMOKE
THEN IT HITS YOU, THERE’S NO HOPE
STEADY HANDS START TO SHAKE FOR THE HURT YOU CAN’T TAKE
‘CAUSE IT’S DONE, SHE IS GONE, LONG GONE

TELL YOURSELF IT’S ALRIGHT
SHE’LL BE COMING HOME TONIGHT
BUT YOU KNOW THAT AIN’T TRUE
‘CAUSE SHE’S WITH SOMEONE NEW
BLAME YOURSELF, BUT THAT AIN’T FAIR
SO PRETEND YOU DON’T CARE

POUR THE DRINKS, THROW THEM BACK
AS YOUR HEART STARTS TO CRACK
GRAB THE PHONE, MAKE THE CALL
AS THE TEARS START TO FALL

BUT IT’S DONE, SHE IS GONE, LONG GONE

Kiefer Sutherland's long anticipated Americana-tinged album, Down In A Hole, is set for release in 2016. Kiefer's debut track, "Not Enough Whiskey," is now on iTunes for $0.99. Download it here - http://smarturl.it/KSwhiskey 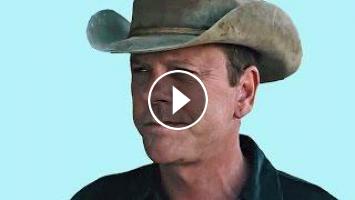 Some of you may have heard that I'm putting an album out this summer, called 'Down In A Hole'. The album in many ways is like a journal of my last twe...