Actors and musicians on Broadway have a grueling performance schedule: eight shows a week with only Mondays off. Yet the band and cast of The Lion King were ecstatic to spend their one free day traveling from New York to Washington, D.C. to celebrate 25 years of the iconic musical with a performance at NPR’s Tiny Desk.

Many of the songs written by Elton John and Tim Rice will be familiar — like the Oscar-winning “Can You Feel the Love Tonight” and “Hakuna Matata.” But the cast also treated the enthusiastic Tiny Desk crowd to songs written just for the stage. “They Live In You” wasn’t in the original movie, but is sung in the show by Mufasa (L. Steven Taylor) to his cub Simba (Brandon A. McCall). The young lioness Nala sings “Shadowland'', another gem from the musical sung by Pearl Khwezi (the first South African cast in the role).

Infused throughout the music of The Lion King is spine-tingling African rhythm and language. It’s as captivating as the groundbreaking costume design by director, co-writer and artist Julie Taymor. The team at Disney Theatrical sent the masks of Simba and Nala in time to be prominently displayed on the desk during the concert. Examining their details up close gave me chills — just like the ones I felt watching the show at the New Amsterdam Theatre, way back in 1997 when the musical first debuted. 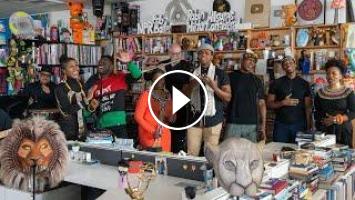 Josh Rogosin | November 11, 2022 Actors and musicians on Broadway have a grueling performance schedule: eight shows a week with only Mondays off. Yet ...