AVA
Lara Downes | December 26, 2020
A few months ago I was scrolling through my phone and found that Jon Batiste had shared my new single with his Instagram followers. I DM'd him my thanks and we chatted about the music and its composer, a Black woman named Florence Price who was a brilliant musical pioneer in the 1930s. We talked about the trailblazers who've come before us and about the work we do to honor their legacy. In this isolated and dark year, it was a lovely moment of connection, light and positivity between musicians. Of being human.

Jon's band — the band he leads on The Late Show with Stephen Colbert — is called Stay Human. He formed the group in 2005 when he was still a student at Juilliard, building an inclusive, genre-fluid sound and a philosophy devoted to connection and what he calls "good vibes." Back when they were kids playing music on the New York subway, the band would bring those vibes onto a packed train to transform a weary commute. These days, the vibes go out to millions of Late Show viewers, a hopeful send-off to another long, hard day.

Everything Jon does — with the band and in his solo music — is in the spirit of uplift. This summer, that meant taking to the streets to lead crowds of Black Lives Matter protesters in freedom songs, spirituals, and the song we most needed to hear as we mourned Black lives lost and dishonored: "Lift Every Voice and Sing." It was Jon's turn to show up, following the long tradition of Black music and musicians, bringing songs to heal us in times of trouble, to rally us in times of crisis. For Jon, born into a large family of New Orleans musicians and raised on second line parades and jazz funerals, music is a blended language that expresses grief and loss, pride and joy.

Our conversation is about lifting every voice. It's about the mission we share to move beyond categories, in music and life. We show up and bring the vibes wherever they're needed. We celebrate our ancestors and stand on their shoulders with pride and gratitude. We listen to each other and to the world around us. We raise up the next generation, teach them well and let them fly. In these very last days of this very hard year, this is a conversation about looking ahead and looking up, towards the rising sun of a new day.

We had so much to talk about. Listen to an extended version of this conversation: http://www.laradownes.com/amplify-1 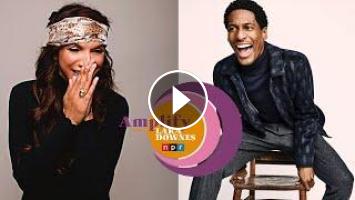 Lara Downes | December 26, 2020 A few months ago I was scrolling through my phone and found that Jon Batiste had shared my new single with his Instagr...