AVA
The world's greatest tenor sings cinema’s greatest music!
Pre order on Amazon: http://po.st/ABCinemaYTAm
Pre order on iTunes: http://po.st/ABCinemaYTiT
Pre order from the Official Store: http://po.st/ABCinemaYTeC
Listen to the album sampler: https://www.youtube.com/watch?v=WLm9ryGCLVk
Living legend Andrea Bocelli gives his unique voice to some of the best loved music from the movies ever composed. Released on October 23rd the album features themes from Doctor Zhivago, The Godfather, Gladiator, Breakfast at Tiffany's and many more, as well as popular songs from stage musicals, immortalised by their film versions, such as west side story and Evita.
Don’t forget to leave a comment and join the conversation on Twitter with #BocelliCinema
Facebook: http://po.st/BocelliFB
Twitter: http://po.st/BocelliTw
Join the Mailing List: http://www.andreabocelli.com/cinema 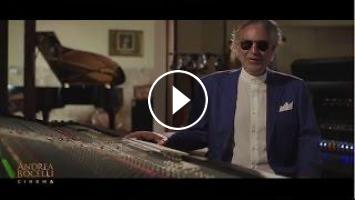