admin
Subscribe to our channel:
Listen to our playlist "Classical Bach" on Spotify:
Like us on Facebook:
JOHANN SEBASTIAN BACH
Piano Concerto No. 1 in D minor, BWV 1052
I. Allegro 00:00
II. Adagio 08:15
III. Allegro 14:53
Metamorphose String Orchestra (Minsk, Belarus) conducted by Pavel Lyubomudrov
Piano: Stanislav Soloviev
(Live Recording)
Johann Sebastian Bach (31 March [O.S. 21 March] 1685 – 28 July 1750) was a German composer and musician of the Baroque period. Bach enriched established German styles through his mastery of counterpoint, harmonic and motivic organisation, and his adaptation of rhythms, forms, and textures from abroad, particularly from Italy and France. Bach's compositions include hundreds of cantatas, both sacred and secular. He composed Latin church music, Passions, oratorios and motets. He often adopted Lutheran hymns, not only in his larger vocal works, but for instance also in his four-part chorales and his sacred songs. He wrote extensively for organ and for other keyboard instruments. He composed concertos, for instance for violin and for harpsichord, and suites, as chamber music as well as for orchestra. Many of his works employ the genres of canon and fugue.
Thank you so much for watching this video by Halidon Music channel, we hope you enjoyed it! Don't forget to share it and subscribe to our channel
All the best classical music ever on Halidon Music Youtube Channel. The very best of Mozart, Beethoven, Bach, Chopin, Tchaikovsky, Vivaldi, Schubert, Handel, Liszt, Haydn, Strauss, Verdi, Brahms, Wagner, Mahler, Rossini, Ravel, Grieg, Dvorák… 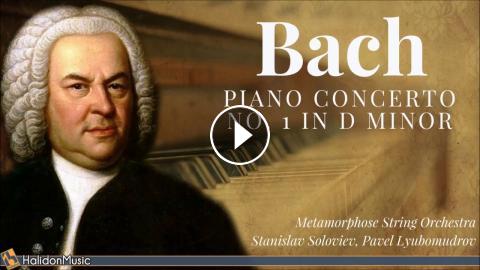