Suraya Mohamed | November 23, 2020
Recorded in his hometown of Detroit, KEM's Tiny Desk performance is light, welcoming and beautifully decorated. So is his music. After almost 20 years of recording R&B hits like "I Can't Stop Loving You" and "Love Calls," he still comforts my soul with his sultry voice and simple, yet satisfying melodies.

Fans have been waiting since 2014 for a new album and it finally dropped earlier this year. Love Always Wins is filled with his signature romantic style. With accompaniments by veteran musicians, Michael "Nomad" Ripoll on guitar and David McMurray on saxophone, we get to hear three songs from the album in this lovely set.

The first, "Friend Today," poignantly articulates a love for our fellow humans: "There's a roll like thunder / They killing our babies, Lord / They headed straight for the border / And we can no longer ignore it." KEM wrote "Not Before You," a classic romantic love song, as a dedication to his wife, Erica. "Lonely" ends the set with an upbeat, hopeful vibe: "There's a life waiting for you / In your brokenness." It's an affirmation that personal struggles can end in true happiness. 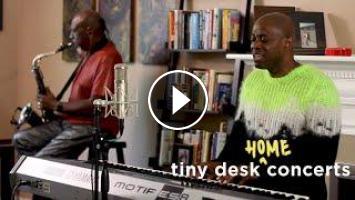