Robin HIlton | April 28, 2021
Watch this stunning "home" Tiny Desk performance from Son Lux and you might conclude the band members live together in an all-white universe without walls or boundaries. But it's all an illusion. In fact, guitarist Rafiq Bhatia, drummer Ian Chang and singer-keyboardist Ryan Lott, who started Son Lux as a solo project back in 2008, each shot their own, separate video with their iPhones, at different times, at their homes scattered across different states. So did the guest vocalists, Nina Moffitt and Kiah Victoria. Editor Evan Chapman then stitched all the videos together.

The effect is dizzying and sometimes disorienting as superimposed images flicker and warble over one another against Bhatia's skittering guitar lines. Everything is bent and a little off – intentionally, not because of the production challenges – and nothing sounds quite like you expect it to. Watch Bhatia's all-too-short solo on "Only" or Lott as he walks his fingers over the keys near the beginning of "Vacancy." Together – and alone – they've perfectly captured the upside-down world we've been living in this past year, where the lines between what's real and imagined are blurred, all sense of place fades into the ether and the normally predictable rhythms of life come undone.

The setlist for this performance includes a song from each of the band's last three albums, a trilogy released over the past eight months, called Tomorrows I, II and III. 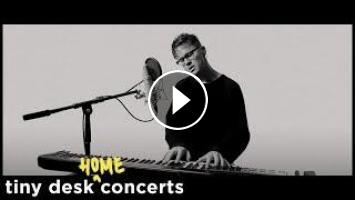