AVA
Un mari à la porte ( A Husband at the Door) is a one-act operetta which was recorded at the Teatro del Maggio in occasion of the 200th anniversary of Offenbach’s birth. Premiered in 1859, this rarely performed work is a most amusing comedy of errors, which is the typical frameset that the composer used to represent and mock the quirks and vices of the French society of his times.
The action takes place in Susanne’s bedroom, on her wedding night. She is in company of her friend Rosita, with whom she complains about having just found out about her husband’s bad character, that she decides to punish and leave outside the door. Rosita tries to soothe her naive friend and eventually leaves. While alone, the bride realizes that there’s a man hidden under the bed. It’s Florestan Ducroquet, a young and penniless musician, who had broken into the room falling from the chimney, while escaping from the fury of a jealous husband. Rosita joins the pair in the room as Henry, the groom, is waiting outside the door pleading to come in, yet thinking the two friends are pulling a prank on him. Finally the intruder manages to flee from the window, seconds after having proposed to Rosita. Order is restored and love thriumphs over all.

This carefree play of allusions and misunderstandings is accompanied by the brilliant music of Offenbach that moves gracefully to the rhythm of dance: polka, mazurka and especially waltz.
The strong points of this production are indeed the colorful, flamboyant setting and costumes and the amazing acting ability of all four singers, whose live performance made the audience laugh with sheer delight. 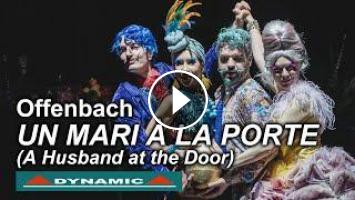 Un mari à la porte ( A Husband at the Door) is a one-act operetta which was recorded at the Teatro del Maggio in occasion of the 200th anniversary of ...