admin
Le Villi is an opera-ballet in two acts that marked Giacomo Puccini’s debut in the world of opera.
It was first staged at the Teatro dal Verme in Milan in 1884. Librettist Ferdinando Fontana based the story on the ancient legend of the Willis, fantastic creatures representing the souls of young women who were the victims of love.
Anna and Roberto are engaged, but he becomes seduced by another woman and his fiancée dies of heartbreak. Roberto, who is subsequently abandoned and left penniless, is haunted by remorse and attacked by the revengeful fairies and Anna’s ghost.
Elements of the more mature Puccini are already recognisable: the
characters of Anna and Roberto anticipate the archetypal ‘love victim’ and ‘man without qualities’ of his later operas; while some of the composer’s touches of harmony and aria structure also portend his future success.
This rare work was chosen to open the 2018–2019 season of the Teatro del Maggio Musicale Fiorentino and the performance received very good reviews:
‘Le Villi is an opera full of excellent music, where Puccini’s future
grandeur is already recognisable. This production mingles essentiality, intelligence and youth.’ – Gbopera.it
‘Conductor Marco Angius delivers a fierce and passionate performance and under his baton the Orchestra del Maggio Musicale Fiorentino succeeds in conveying all the various shades of the score.’ – Gbopera.it
The dancers of Compagnia Nuovo BallettO di ToscanA deliver an
engaging performance: Chiara Aversano’s costumes and Susanna
Sastro’s choreography turn them into dark and wild creatures, imbued with supernatural energy and the wicked malice of lost souls. 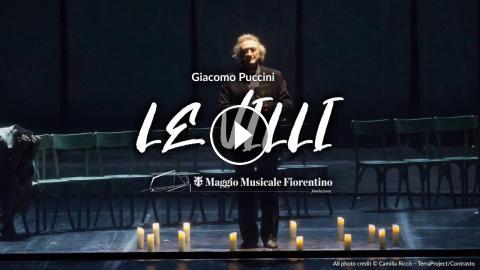 Le Villi is an opera-ballet in two acts that marked Giacomo Puccini’s debut in the world of opera.It was first staged at the Teatro dal Verme in Milan...