AVA
From Sept. 15 through Oct. 15, Tiny Desk is celebrating Latinx Heritage Month with an "El Tiny" takeover, featuring Jessie Reyez, Susana Baca and more musicians from all corners of Latinidad.

Fi O’Reilly | September 15, 2022
What a way to get our second annual El Tiny series going! Omar Apollo kicks off Latinx Heritage Month with a full-band rendition of "En El Olvido," backed by Las Mariachis Lindas, as he channels a childhood spent listening to Juan Gabriel into his performance of the Mexican corrido.

In the eternal wisdom of Alt.Latino co-host Anamaria Sayre, it's not a Mexican party until someone starts crying, and Apollo embraces esta melancolía as the band slips into the easy R&B number "Evergreen." "We're about to get more sad," he says to the crowd with a grin.

Despite the heartbreak and unrequited love songs, there's a sense of ease in this Tiny Desk concert — an easy camaraderie among the group as the members sing through "Evergreen" and "Petrified" before finishing with the (slightly) more upbeat "Endlessly." El corazón puede estar adolorido, but in community, the pain never seems hopeless.

As Apollo's Tiny Desk comes to an end, he offers the audience a homework assignment for self-improvement, for putting the negative behind you and making yourself available to participate in building community: "I want y'all to think about something,” he says. “I want you to go home, I want you to meditate and I want you to just burn the bridge." He laughs. “I’m playing!” But as his and the band’s joyful energy attests, in the world of Omar Apollo, there’s only room for building each other up. 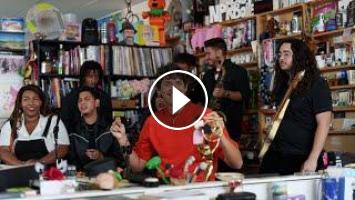