I've always found something comforting in the music of Ashley Ray. When I saw her in this Tiny Desk (home) concert, sitting on a screened-in porch with producer, songwriter and longtime friend Sean MConnell (and a distant chorus of crickets chirping in the early evening light), I realized why: Her songs sound like home. Love of family, the memories and traditions we share, tales of loving the past until it's time to let it go: They're all in her music, amplified by this setting, with beautiful, two-part harmonies and a couple of acoustic guitars.The three songs performed here – "Pauline," "Dirty Work" and "Just A House" – are all from Ashley Ray's latest album, Pauline (No. 26 on our list of the 50 Best Albums Of 2020). It feels like a breakout release for this Kansas native, but she's been putting in the hard work for close to 20 years now, spending much of her time waiting tables while writing songs for better-known artists like Little Big Town, Lori McKenna and Ruston Kelly. But her best and most affecting work to date arrived with Pauline, after she decided to open up and share her own deeply personal stories of love and loss. After living and trying to make it in Nashville the past couple of decades, it's a kind of homecoming for Ashley Ray, and she takes us with her. 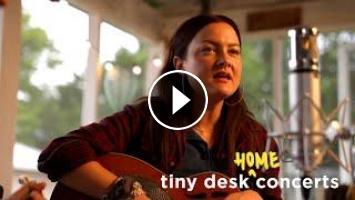