Burt Bacharach is a legend in the world of popular music. I'll name a few songs, in case you didn't know: He co-wrote "What the World Needs Now Is Love," "Raindrops Keep Fallin' On My Head" and "Alfie." Melody is his strength. At age 92, he's teamed up here with Daniel Tashian, who's written songs for Lee Ann Womack, Tim McGraw, Martina McBride, and more recently with Kacey Musgraves. It was the album Daniel co-wrote with Kacey Musgraves, Golden Hour, that bonded Burt and Daniel. They met the day after Daniel received a Grammy for that record.

Daniel's strength is in his lyrics, and you can listen to how Burt Bacharach and Daniel Tashian meld their talents of melody and lyricism in this Tiny Desk (home) concert. The songs come from their recent EP, Blue Umbrella, which they recorded together in Nashville before the pandemic. But for this Tiny Desk, the two were thousands of miles apart. And though there's distance between them, their recent friendship feels like a deep bond. A love of songcraft brought these tremendous talents together, writing songs of friendship, songs that have been a comfort for both of them in these challenging days. 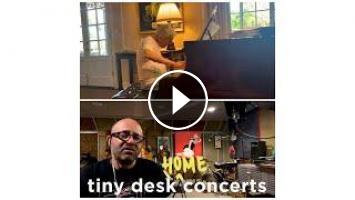