AVA
From Sept. 15 through Oct. 15, Tiny Desk is celebrating Latinx Heritage Month with an "El Tiny" takeover, featuring Jessie Reyez, Susana Baca and more musicians from all corners of Latinidad.

Felix Contreras | September 19, 2022
Having played the music myself, I have always lovingly referred to Mexican Regional music as “cowboy hats and accordions.” But this is not your grandparents’ Mexican Regional. Younger musicians today are rejecting the restrictions of that industry-imposed title and adding contemporary sounds like hip-hop and trap while still maintaining the emotional spirit and rough edges of the genre.

Then there’s Carin León — a game changer if there was one. His Tiny Desk (home) concert is a deep dive into this moment in time as the genre actually changes. He starts with a traditional bolero “El Amor De Tu Vida” but the second song, “Alguien Mejor,” is an example of how he and his amazing group are changing things. It starts with a traditional bajo sexto guitar as he raps and sings the lyrics, but when the mournful strains of a pedal steel guitar popular with trad country music enters the arrangement, the cross cultural reality of life along the border where this music comes from springs to life with the passion of both genres and cultures.

It’s an exciting moment from a four song performance that beautifully represents how a culture changes and develops as outside influences become part of its aesthetic. The music’s rustic roots are on display in the barroom set, complete with strategically placed bleached-out cattle skulls. You still see accordions and cowboy hats in this video but you hear so much more — you can actually hear a society in transition. 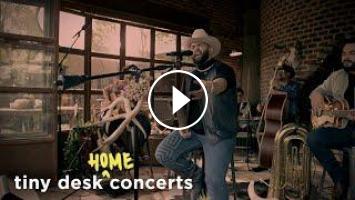