AVA
Robin Hilton | January 10, 2023
On many levels, this breathtaking Tiny Desk from dodie felt like the ultimate cathartic release. The English singer and her band arrived after more than a year and a half of planning and COVID-related delays; and, this was the final performance we had behind the desk in 2022, capping our long-awaited return to the building after more than two years of pandemic disruption. A lot of us who were lucky enough to see it in person were pretty teary-eyed by the end.

But it was also a release because the music and the way dodie and her band pulled it off were both so magical. Bassist Jillian McKenna is a dodie fan from Canada who joined the band just for this performance after answering a callout on Instagram. The three backup singers are friends who flew in from Los Angeles; the string section was a mix of dodie’s touring band and DC-based artists and fans of Orla Gartland can see her move from piano to guitar and floor tom during the set. dodie herself, who played everything from piano and clarinet to ukulele, and the rest of the band flew in from England solely for the Tiny Desk, arriving on Saturday and flying back Monday not long after playing.

Together, they filled the NPR Music office with songs that radiated with love and life, perfectly recreating the playful, kaleidoscopic spirit of dodie’s 2021 debut album Build a Problem and last year’s Hot Mess EP. Strikingly melodic, whimsical and wistful, dodie’s deep reflections on trauma, letting go and moving on were the perfect close to a year when it felt like we could finally exhale and come together again in song. 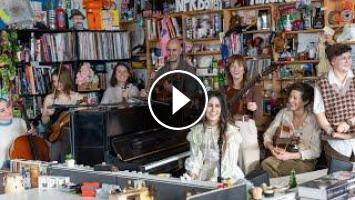 Robin Hilton | January 10, 2023 On many levels, this breathtaking Tiny Desk from dodie felt like the ultimate cathartic release. The English singer an...