admin
April 27, 2018 | Felix Contreras --
When I first heard ÌFÉ I was stopped in my tracks. Literally. I pulled the car over and just listened.
I recognized Afro-Cuban drumming and chanting, but it was coming at me with electronic furnishings that made their drums and vocals sound like a futuristic spiritual ceremony.
ÌFÉ is from Puerto Rico and feature a surprising back story. The group's debut album, IIII+IIII, is a fresh electronic take on tradition that's winning over even the most devout practitioners of the western African-based spiritual ceremonies that form the base of their music. That's hard to do with ritual music.
For their turn behind the Tiny Desk, Otura Mun and his ensemble unplug their drums for their first tune, an acoustic version of their "House of Love (Ogbe Yekun)". The sound of the second song here is what startled me when I heard the band's debut CD last year: the parts normally performed on Afro-Cuban bata drums and chekeres are electronically treated for a traditional prayer for the deity Oduduwa. By the last tune, "Bangah (Pico Y Palo)," the electronics have created a sonic playground that plays perfectly against the battery of Afro-Cuban rhythms.
Listen for the explainer during the performance by Otura Mun, who also gives a shout out to those struggling against the vestiges of colonialism still prevalent in Puerto Rico.
Read Alt.Latino's ÌFÉ primer.
Set List
"House of Love (Ogbe Yekun)"
"Prayer for Oduduwa (Para Meceditas)"
"Bangah (Pico y Palo)"
MUSICIANS
Otura Mun (vocals/percussion); Beho Torrens (vocals/percussion); Rafael Maya (vocals/percussion); Anthony Siera (vocals/percussion); Yaimir Cabám (vocals/guitar/percussion)
CREDITS
Producers: Felix Contreras, Bronson Arcuri; Creative Director: Bob Boilen; Audio Engineer: Josh Rogosin; Videographers: Bronson Arcuri, Maia Stern, Dani Lyman; Production Assistant: Joshua Bote; Photo: Eslah Attar/NPR. 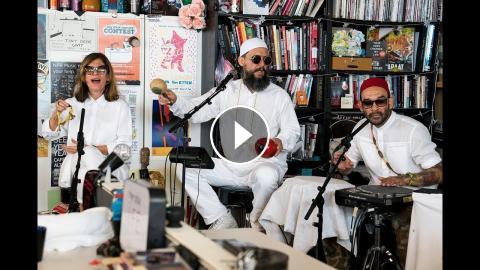 April 27, 2018 | Felix Contreras -- When I first heard ÌFÉ I was stopped in my tracks. Literally. I pulled the car over and just listened.I recognized...