Classic soul music feels best in a club, with a lead singer and big band, preferably with horns, playing off the excitement of a sweaty crowd, drawing them in to stories of love, or love lost, or love reclaimed. It's a hard feeling to find in our pandemic times.

In his Tiny Desk (home) concert, soul legend Don Bryant brings us there, with just a keyboard, a guitar player and an otherwise empty room. Wearing an elegant black and grey jacket matching his salt-and-pepper hair, Bryant evokes style and experience – someone who has been in it for the long haul.


Bryant, almost 80, has been in the music business since the early days of rock and roll; he wrote his first hit, the Five Royales' "I Got to Know," in 1960. He went on to his biggest success as a songwriter for Hi Records in Memphis, home of Al Green, Ann Peebles (with whom he wrote "I Can't Stand the Rain") and Otis Clay. For a number of years he only recorded gospel music, until 2017 when he began releasing soul records again, backed by members of the Bo-Keys.


All of that history stands behind this performance, featuring three songs from his latest record, You Make Me Feel, all written by him. His voice is powerful and resonant, deeply rooted in gospel. The stripped-down band includes just the right players: Scott Bomer, who produced the album and is a member of the Bo-Keys, holds it down on percussive guitar, and Archie "Hubbie" Turner, a member of the rhythm section of Hi Records during its '70s heyday, is a master on the keyboards, locked in tight to Bryant's expressive vocals. It's a reminder that soul music really just needs a voice and a human story. We're lucky that Don Bryant is still at it, and at such a level. 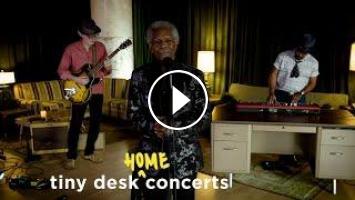