Bob Boilen | October 19, 2020
Gracie and Rachel are perfect musical mates. Their styles conjure contrast, with Gracie Coates' more pop-leaning keyboard melodies alongside Rachel Ruggles' classical background. They've been honing their orchestral pop sound since high school. These days they share space in a NYC apartment and are grateful to be able to "commute from their bedrooms" at a time when so many collaborators can't be together.

The duo made one of my favorite records of 2017, and they've just released their second album, Hello Weakness, You Make Me Strong. The title of the album reflects their positive attitude despite angst. The lyrics to "Ideas" highlights that attitude by encouraging us to dig inside ourselves and discover our creative spirit" "So take your little ideas / Make them a little bit stronger / Throw out the ones you can't / You don't need them any longer."

The duo made much of this music in the past year and a half, in the very room they're performing this Tiny Desk (home) concert. It's a beautiful portrait in black and white and — if you're new to Gracie and Rachel — a welcoming introduction. I've seen them in concert, including alongside Ani DiFranco, who released this album on her label Righteous Babe. I look forward to the day they can leave their space and perform these songs in a venue; for now, put on a good set of headphones and listen to their message of positivity. 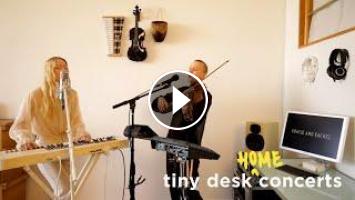