admin
Jon Batiste is from New Orleans, where a street parade might assemble around the corner on any given day. Evidently, he likes a good walkabout: He's liable to lead his band at a guerrilla concert in the New York City subway, or out of a venue, or — as he did at the Newport Jazz Festival — off stage and into the audience.
After playing a set at Newport, he and the Stay Human band kept walking. They walked past the backstage trailers, through the quad stage, and up onto an overgrown rampart of Fort Adams — the 190-year-old edifice which houses the festival. After a long day of travel, interviews and a headlining performance, they were there to give us a special and private encore.
They chose the tune "Believe In Love," which Batiste voiced with a tender edge and a melodica. Appropriately enough, the keyboardist and bandleader calls his portable performances "love riots": attempts to generate instant community through music. Then, having done their best to share said love with our cameras, the six musicians started walking again, into the crepuscular haze and out of sight.– PATRICK JARENWATTANANON
SET LIST
Believe In Love
PERSONNEL
Jon Batiste, voice/melodica; Eddie Barbash, alto saxophone; Barry Stephenson, bass; Ibanda Ruhumbika, tuba; Joe Saylor, tambourine; Jamison Ross, cowbell/backing vocals.
CREDITS
Producers: Mito Habe-Evans, Patrick Jarenwattananon; Event Manager: Saidah Blount; Videographers: Mito Habe-Evans, Adam Kissick, Colin Marshall, Nick Michael; Audio Engineer: Kevin Wait; Special Thanks: Newport Jazz Festival, Mark and Rachel Dibner of the Argus Fund, The Wyncote Foundation, National Endowment for the Arts; Executive Producer: Anya Grundmann 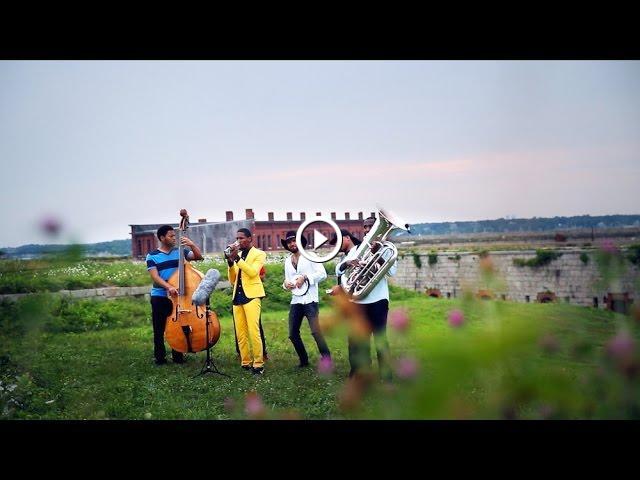 Jon Batiste is from New Orleans, where a street parade might assemble around the corner on any given day. Evidently, he likes a good walkabout: He's l...