AVA
This performance was recorded on Nov. 8, 2019. We will continue releasing Tiny Desk videos of shows that had already been taped. In light of current events, NPR is postponing new live tapings of Tiny Desk Concerts. In the meantime, check out Tiny Desk (home) concerts! They’re recorded by the artists in their home. It’s the same spirit — stripped-down sets, an intimate setting — just a different space.

May 4, 2020 | Bob Boilen -- Jon Batiste came to the Tiny Desk with some surprises back in November of 2019. Midway through his set, he stopped to say, "it's the first time we're ever playing these songs, and it's the first time we're playing together." The New Orleans musician came to the Tiny Desk not with his late-night house band, but with an all-new cast. His all-female collaborators — Endea Owens on acoustic bass, Negah Santos on percussion, Sarah Thawer on drums, and Celisse Henderson on guitar and vocals — were an inspiration.

As is often the case when musicians perform in Washington (and especially blocks from the Capitol) the banter hinted at the political. Jon Batiste stopped to tell the NPR crowd, "we're playing some music, and we're coping. The times are in an interesting place, but music is always that universal language that can bring people in a room together." Little did Jon know how those words would feel six months later.

Jon Batiste took us through some of the many sides of his rich musical history, from the soulful ballad titled "Cry," to the jazz and hip-hop inspired, "Coltrane" and a rocking Motown-inspired tune, "Tell The Truth," before ending with a bit of church with, "I Need You." In just over 15 minutes, Jon Batiste bounced from playing the Wurlitzer to the electric guitar to the piano and then a melodica, all the while singing and sharing his talents and bringing us joy in interesting times. 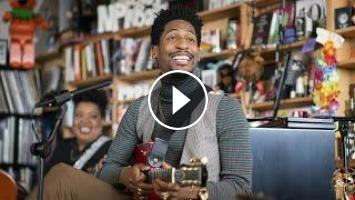 This performance was recorded on Nov. 8, 2019. We will continue releasing Tiny Desk videos of shows that had already been taped. In light of current e...