Bobby Carter | June 18, 2020
I was very conflicted as I watched Little Dragon's Tiny Desk (home) concert. The group's latest album, New Me, Same Us, is their grooviest, most concentrated in years, and I was eager to hear these songs as Little Dragon's music is best experienced: live on stage. "Some of you might know that we were supposed to be on tour in the states, but due to these crazy times it got canceled," lead singer Yukimi Nagano says. On that same token, these stripped-down iterations from the band's home studio in Sweden move me but in a different way. I find myself focusing on the songwriting and how all the instruments come together for these numbers, proving just how strong the tracks from New Me... are. Then as a bonus, Little Dragon played an oldie, "Forever," which is still my favorite track from this genre-bending band. While I'm left to wish for the united movement with hundreds of others to the downbeat of songs like "Rush," this Tiny Desk performance solidifies me as a die-hard fan. I'll be first in line when the show resumes.

SET LIST
"Rush"
"Where You Belong"
"Forever"
"Every Rain" 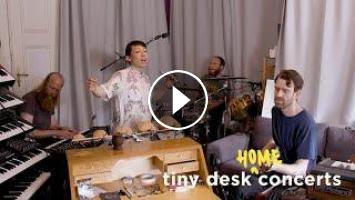